Viral DNA within our genome helps us fight infections 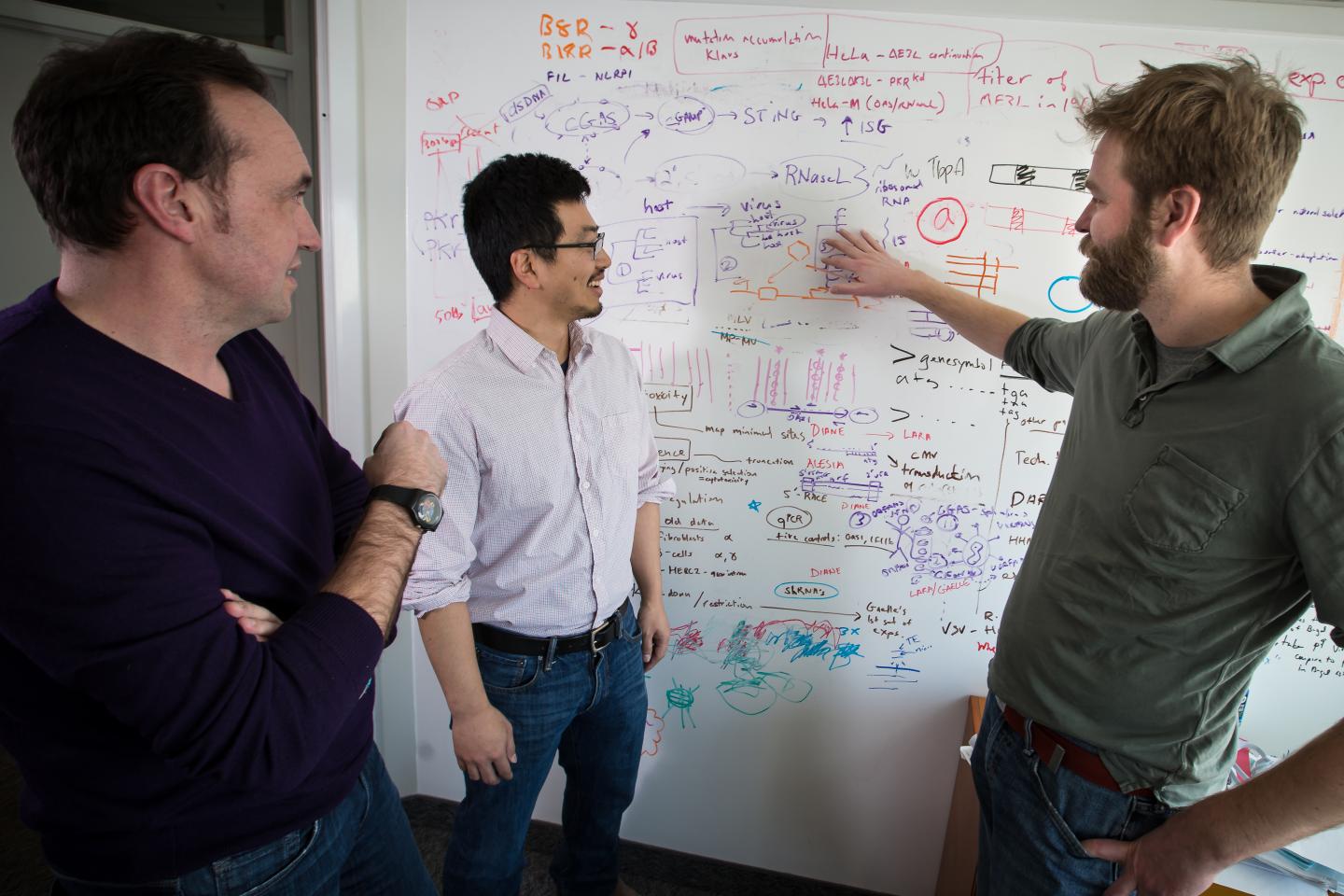 Research from University of Utah geneticists, Cedric Feschotte, Ph.D., Edward Chuong, Ph.D., and Nels Elde, Ph.D., reveals that DNA remnants of viruses embedded into the genomes of our ancestors millions of years ago may help us fight viral infections today by controlling sets of genes in the innate immune system. Photo credit: University of Utah Health Sciences

About 8% of our DNA traces its origins to viruses. Those DNA fragments represent artifacts of past infections, artifacts that were integrated into the human genome over evolutionary time. Scientists have puzzled over the role this DNA since its discovery.

Now, a new study by JCC Fellow Edward Chuong reveals an important role for this type of DNA, known as endogenous retroviruses (ERVs). “Viruses are normally considered a major threat to our survival, and we have been locked in evolutionary battle for millions of years,” says Chuong. “Our findings suggest that viral DNA has been evolutionarily recycled into important parts of our own immune responses.”

The study, published in Science on March 4, 2016, shows that some ERVs act as switches that trigger a network of genes key to our innate immune response, the body’s first line of defense against viruses and other pathogens.

“When we were first thinking about this project, ERVs had already emerged as a major contributor of regulatory switches in a lot of different cell types,” says Chuong, who is a postdoctoral fellow at the University of Utah. “Switches can control genes, but a lot of switches littered in our genome don’t do anything at all.” Plus, Chuong explains, many previous studies focused on stem cells and cancer cells, which made determining their role in the host challenging.

Chuong and his advisors, Cedric Feschotte and Nels Elde, turned to the innate immune system as a model. “We can investigate a lot of the key parts of it in a cell culture dish. This is in contrast to ERV switches in stem cells, which would require a mutant organism,” he says. “Also, given the evolutionary ‘arms race’ between hosts and their pathogens, immune responses are constantly evolving. So, we reasoned that if we were going to find a ‘domesticated’ ERV, we would find it most easily in the innate immune system.”

Using CRISPR technology, Chuong excised some of the ERV switches to determine if they were doing anything important. Indeed, many were. Deleting switches near important immune genes disrupted the defense response.

“The big surprise came from the ancient retrovirus we were studying, MER41,” explains Chuong. “We found that relatives of MER41 had separately invaded other mammalian lineages including carnivores and ruminants, and that they also left behind immune switches. This suggests that virus may have evolved these immune-regulated switches for its own selfish purposes, which raises many intriguing questions.”

Chuong studied computational biology as an undergraduate at UC San Diego and investigated how parent-offspring conflict affects the rate of gene evolution in the placenta with Dr. Hopi Hoekstra. For his PhD at Stanford University, he joined Professor Julie Baker’s lab and demonstrated that ERVs facilitate the regulatory evolution of the placenta.

“For my fellowship I wanted training in experimentally investigating the biology of ERVs,” he says. “One of the many challenges of this project was doing Western blots to detect a small secreted protein. I did nothing but Westerns for many months to troubleshoot various parts of the procedure and it was very rewarding when it finally worked.”

The research was featured in many major media outlets, including the New York Times, The Atlantic, The Scientist, Smithsonian Magazine, and Wired.

During his post doc, Chuong plans to continue investigating how pervasively ERVs have become integrated into our immune response, including other species and pathways and eventually lead a research lab of his own to explore the evolutionary impact of these ERVs.

“The question now is whether these cases we found represent a few chance events, or whether they’re the tip of the iceberg,” he says.