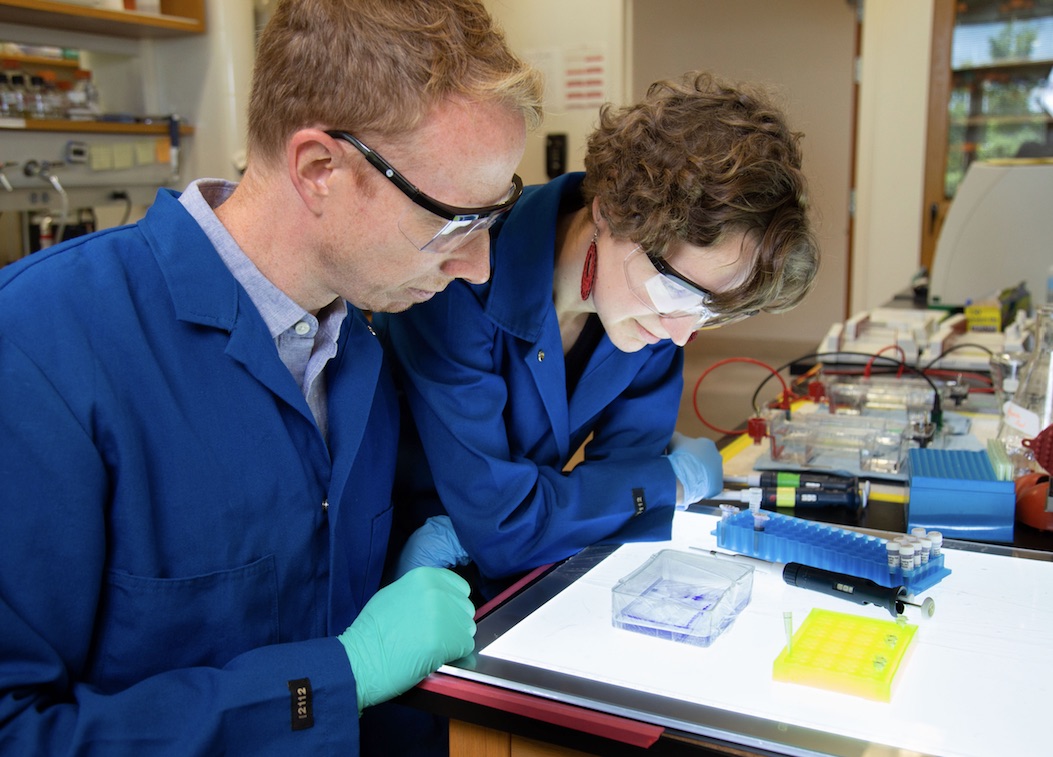 One hallmark of many neurodegenerative diseases is a buildup of the protein tau within neurons. For years, researchers thought that tau’s normal function required acting alone along microtubules – and that it clumped together only under disease conditions.

“We believe our study has large implications when thinking about the physiological state of tau molecules inside of healthy cells,” Ori-McKenney says. “By revealing that self-association may be a common event for tau molecules, rather than just a pathological event, our study opens up a lot of new questions about how, why, and where a healthy cell may want tau to self-associate into condensates.”

In experiments, Ori-McKenney, McKenney, and their colleagues found that tau can exist in two dynamic states on microtubules: diffusely bound and tightly packed. They also found that tau senses different types of microtubule lattices and only aggregates on one type. “Only certain types of microtubule lattice can support tau condensation, suggesting tau molecules can discern between different conformations of the microtubule, and that the self-association of tau can be tightly controlled. These findings suggest that tau self-association can be spatially controlled within cells,” she explains.

Tau’s ability to move in and out of the condensate state may be a common molecular process necessary to perform its normal cellular functions. “Our results further suggest a potential new pathway by which tau self-association could transition into a pathological state, and this is something we are excited to test in future studies,” she says.

Ori-McKenney was a JCC Fellow in Yuh-Nung Jan’s lab at UC San Francisco, and she was recently profiled in the Journal of Cell Science. “Yuh-Nung was an incredible postdoc mentor,” she says. “He had an amazing sense about what each person needed from him, as a mentor, in order to succeed in their particular goals. I personally wanted independence and an ability to explore a range of projects, and he gave that to me. But Yuh-Nung also inspired me to think beyond one process or one system and think about my work in the context of a larger picture.”

She adds that her original JCC proposal did not develop into a viable project, but she learned from the experience and launched herself in a new direction. That ability to shift focus when necessary proved useful later. “Within the first year of starting my own lab, almost every project that I started failed for various reasons,” she says. “We either obtained very clear negative results or we encountered technical difficulties. I was able to apply the lessons I learned as a postdoc and I continued to pivot projects until we were working on a project that was producing robust results.”

Now, Ori-McKenney is continuing to study microtubule-associated proteins (MAPs) and their roles in a variety of cellular processes. “We have a recent paper on BioRxiv (Monroy et al., 2019) that compares 6 different MAPs and their effects on three different microtubule motors. We want to understand why the neuron needs all of these MAPs at the same time and sometimes in the same cellular locations in order to develop and function properly.” She is also continuing to study tau. “The one fly project in my lab that is actually taking off (pun intended) is dissecting the upstream kinase pathways that contribute to tau hyperphosphorylaton and neurodegeneration in adult flies. This is quite the undertaking, but stay tuned!”