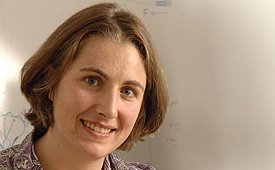 Before scientists had tools to perturb gene expression and look for molecular interactions, they poked and prodded cells to examine them.  Advancing that understanding of how cells respond to forces and displacements, former JCCF Fellow Margaret Gardel compares protein structures she builds outside the cell with how living cells generate and respond to forces.  Gardel says, “We now understand how different levels of forces generated by cells are regulated by different organizations and different motion dynamics of the [cell’s] actin cytoskeleton.”

That fundamental research, which Gardel hopes to publish in the coming year, could prove insightful for cancer researchers because many aspects of cancer’s progression are associated with changes in cellular contractility:  cancer cells migrate through very rigid environments and pass through boundaries that normal cells don’t.  A physicist by training, Gardel says it’s the convergence of physics with cell biology that “Is giving us an understanding of the physical behaviors of cells in ways that I didn’t really think would be possible three years ago.”

It was just three years ago that Gardel ended her JCCF Fellowship with Clare Waterman at the Scripps Research Institute (at the time) to build her own cellular biophysics lab at the University of Chicago.  Of her lab, Gardel says, “That’s what I’m most proud of,” with her lab members researching subjects as diverse as jamming in colloidal suspensions to the role of inhibitors in actin dynamics in cancer cell migration.  Still, her collaboration with Waterman, also a former JCCF Fellow, continues:  “From the beginning, it was her goading and me wanting to try something different,” Gardel says.  “We just hit it off and it was non-stop from there.”