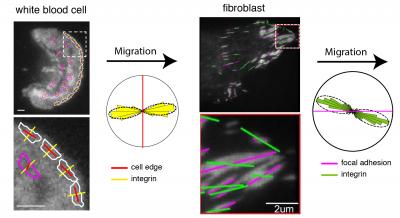 Immune cells crawl out of capillaries to fight infection.
Cells move in to close a wound.
As a fetus grows, cells crawl into tissues, forming new vessels.
Tumor cells metastasize and invade additional organs.
Blood vessels over infiltrate the retina to cause macular degeneration.

In each of these examples, cells physically move from one place to another. Sometimes that movement is critical for development or defense against infections and illnesses. Other times, it’s a sign that something has gone awry.

“We’ve got to know how cell migration works if we’re going to start it and stop it when we want to,” said Clare Waterman, NIH Distinguished Investigator and former JCC Fellow (1997).

Cells can move in specific directions, but how? How can molecules sense the directionality of a physical cue? This is a focus of Waterman’s research. In recent studies, she and her colleagues hypothesized that a physical cue could align sensors within the cell and give it direction.

Two types of proteins are involved: integrins, which span the cell membrane, and actin molecules, which form part of the cells cytoskeleton.

“If you think of the cell as a car, the actin flow is the engine,” Waterman said. “The cell can sit there, idling its engine. But when the integrins activate and bind externally, they are like tires hitting the road, providing friction. The engine goes into gear and the car moves.”

When a cell moves, it extends one edge of its membrane forward, and integrins grip a nearby surface. Simultaneously, integrins on the tail-end release their grip.

Viewing integrins with a microscope is difficult. With a light microscope, they are too small and tightly clustered to see clearly. With electron microscopes, they appear fuzzy and unfocused. But using live cell microscopy at the Woods Hole Marine Biological Laboratory, Waterman and her colleagues were able to tag the integrins with polarized fluorescence, allowing the researchers to visualize the orientation of integrins in comparison with the actin flow.

In one study published in Proceedings of the National Academics of Sciences, Waterman and her colleagues tested the alignment of integrins in relation to the cytoskeleton within a migrating fibroblast cell and its external environment. They found that these forces can tilt the orientation of integrins at their point of attachment with the external environment. And this might explain how migrating cells can sense directional cues.

In a second study in Nature Communications, the team found that similar principles control the alignment and orientation of integrins on T cells of the immune system.

Waterman says that the work, a collaboration between three different labs, was a lot of fun. Each of the labs came to Woods Hole for five successive summers. “It was like summer camp,” she said. “We learned a lot from each other, and it was an intense and exciting collaboration.”

Next, a bioengineering postdoctoral fellow in Waterman’s lab plans to test whether cells can be steered with nano-magnets attached to the integrins.

Waterman’s research traces its roots to her love of sports, her fascination with how muscle works, and her mechanical orientation. She played lots of sports (field hockey, track, and softball), she enjoys fixing things, and, she says, learning how muscles worked “blew my mind.” Her formal education in biochemistry from Mount Holyoke set the foundation for her M.S. in exercise science from the University of Massachusetts and her Ph.D. at the University of Pennsylvania Muscle Institute.

When Waterman was awarded her JCC postdoctoral fellowship in 1997, she had planned to study the cytoskeleton in drosophila, focusing on large scale movement in oocyte development, at Yale. But after a visit to Ted Salmon’s lab at UNC Chapel Hill, she changed her mind. She completely rewrote her JCC application and pursued her interest in fluorescent speckle microscopy instead.

“Without that fellowship, I wouldn’t be anywhere near the microscopist I am today,” she said.