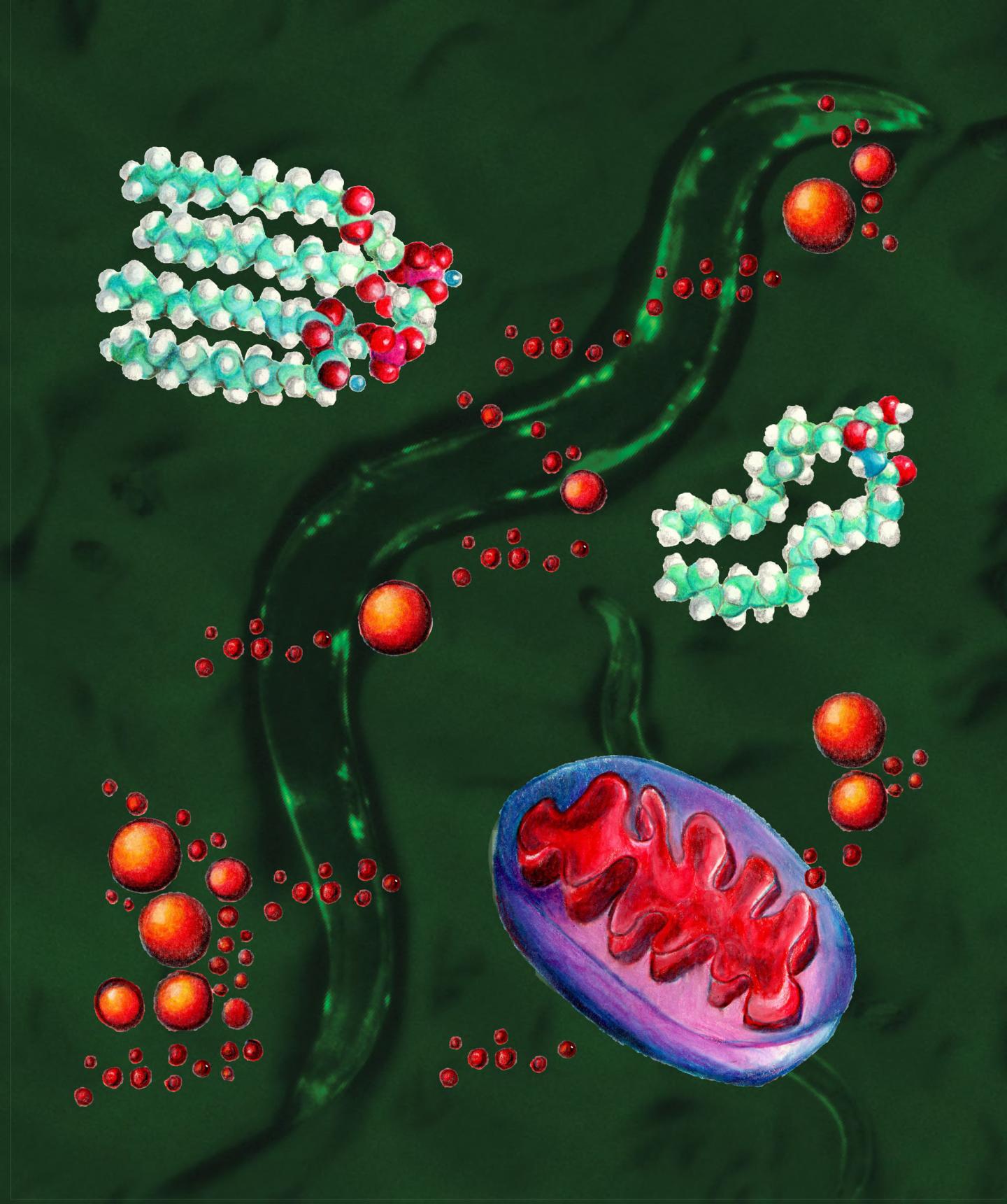 Caption: Against a background of nematode worms, this graphic depicts the stressed mitochondria (lower right, blue and red) accumulating lipid droplets (red balls) in the interior or cytosol of the cell. The molecular structure of the two key lipid components in the newly discovered signaling pathway are ceramide (right) and cardiolipin (upper left). The background image shows a picture of the nematode C. elegans with clumps of the Huntington’s aggregates (bright green because they’re tagged with green fluorescent protein) in the body wall muscle cells. Image credit: Hyun-eui Kim, UC Berkeley

In a recent Cell publication, former JCC Fellow Hyun-eui Kim reported that lipids coordinate a stress response implicated in neurodegenerative diseases, such as Huntington’s. And if the lipid pathway can be effectively manipulated with drugs, the results point toward future treatments for such diseases.

During her PhD at the University of Texas Southwest Medical Center, Kim studied the biochemical details of programmed cell death initiated in the mitochondria. “Many cancer cells evade this mechanism to proliferate forever. I was interested in curing cancer by re-activating this mechanism,” she explains. “However, when my grandfather died of Parkinson’s, a devastating neurodegenerative disease, at later days of my graduate study, I decided to study the basic science that can help finding tools to fight with many types of age-related diseases.”

Normally, our cells have methods to prevent proteins from folding improperly and fixing them when they do. These processes, known as protein folding stress responses, become less efficient as we age. Abnormal, misfolded proteins can build up in and around brain cells, forming plaques that lead to the mental problems and death associated with neurodegenerative diseases, such as Parkinson’s, Alzheimer’s, and Huntington’s.

For this study, Kim and her colleagues started with a nematode C. elegans that models Huntington’s disease and altered its mitochondria in a specific way. They observed that the worms grew fat and the change prevented the accumulation of misfolded proteins. Cultured human cells affected by Huntington’s disease responded the same way. In separate experiments, diseased worms and human cells were treated with a drug that affected with the storage of lipids, making more fat available. This also prevented the the accumulation of misfolded proteins.

The reason? A specific lipid helped turn on protective genes.

Two aspects of the results surprised Kim the most: that the mitochondrial stress response was the only such response that communicates with the rest of the cell, and that lipid metabolism was involved.

“Navigating through the biological meanings by experiments after experiments to learn this novel mechanism has been difficult,” she says, explaining that the hardest part of the research was convincing herself that the results were not merely an artifact. “My study confirms again that metabolic regulations had important keys to solve many different types of deficiencies in cellular functions.”

“Luckily, I was able to find a novel mechanism that can potentially be applied to these diseases by activating stress response that communicates between mitochondria and cytosol,” says Kim, who works in the laboratory of HHMI Investigator Andrew Dillin and intends to become an independent researcher. “Ironically, my research brought me back to the mitochondria biology. Mitochondria are fantastic organelle to study as we just now started understanding the roles of mitochondria in aging and diseases.”