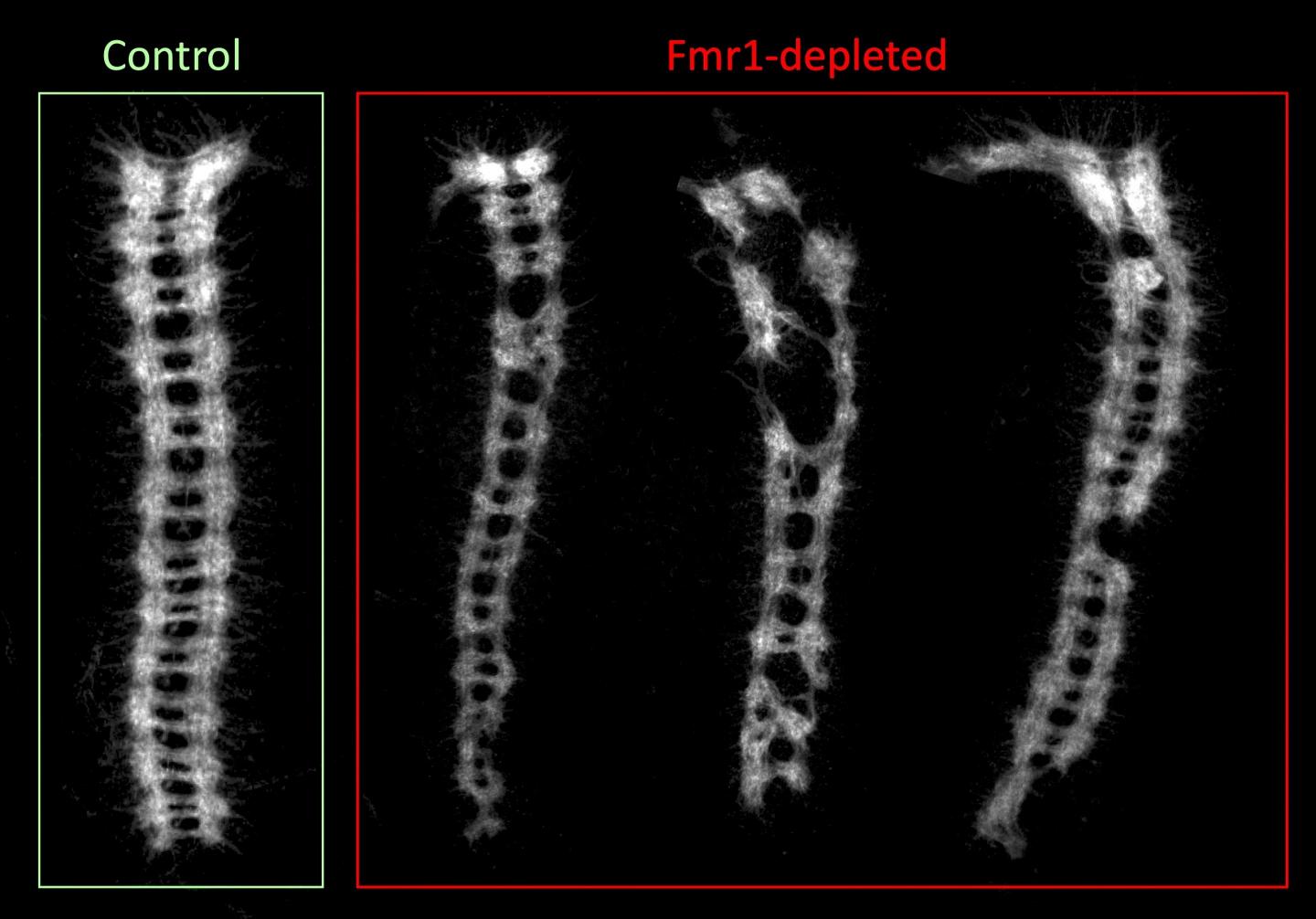 This image shows an example of defects in the development of the embryonic central nervous system in stored eggs that lacked the Fmr1 gene — stored being the key word, since un-stored eggs showed normal development. Analogous to the spinal cord, the ladder-like ventral nerve cords on the right are from stored eggs lacking in Fmr1. The image on the left is a normal ventral nerve cord with functioning Fmr1. Image Courtesy of Ethan Greenblatt and Allan Spradling.

FMR1 is a gene required for normal brain and ovary development – and mutations in FMR1 are implicated in some types of infertility and in the most common inherited intellectual disability, fragile X syndrome.

How does it work? And what happens when it doesn’t? New research published in Science by former JCC Fellow Ethan Greenblatt sheds light on these questions. Using a new method to study the gene and its protein, he upended previous assumptions about FMR1 function.

“My advisor Allan Spradling and I first became interested in the question of how egg cells (oocytes) survive long periods of dormancy – for example, human oocytes form during fetal development and then arrest for up to 5 decades,” said Greenblatt, who became a postdoc at the Carnegie Institution for Science in 2012.

Using fruit flies, Greenblatt performed a genetic screen to find genes involved in egg failure and homed in on FMR1 for further study.

“Interestingly, FMR1 in humans is linked to a prominent cause of premature ovarian failure, as well as the most commonly inherited autism spectrum disorder,” he said. “This made us extremely interested in discovering FMR1’s function, which has been controversial for a long time.”

Previous FMR1 studies had used in vitro experiments or focused on FMR1 function in neurons. Greenblatt preferred a different approach.

“Oocytes are enormous, homogeneous cells which makes them simpler to study than neurons, and they share a lot of the same biology. The first challenge was coming up with a robust way to stimulate flies to produce new eggs, hold on to those eggs for a defined period of time, and then lay them ‘on command’ so we could test their function in vivo,” Greenblatt said. “We found that we could accomplish this by playing with the flies’ diets and access to mates.”

Learning a new technique to identify the gene’s function was his second challenge. “I spent quite a few months optimizing ribosome profiling in my own hands and was lucky to receive tips from Jonathan Weissman’s lab, which originally developed the technique.”

The study showed that although eggs from flies lacking FMR1 seemed normal, their function decreased as they were stored over time. Plus, when fertilized, the FMR1-lacking eggs developed into embryos with nervous system defects. The mutant eggs were deficient in several hundred large proteins, many of which are associated with autism.

“Our ribosome profiling results completely surprised us,” he said. FMR1 had been thought to repress protein synthesis, and the new results showed that the gene activated translation of proteins. “We think that FMR1 serves as a sort of a helper, which boosts the production of critically important large proteins that are difficult for eggs or neurons to manufacture. Without FMR1, egg cells have inadequate supplies of specific large proteins and prematurely start to fail. Since FMR1 is also important in the brain, the loss of certain large proteins associated with autism could explain the autistic symptoms of fragile X syndrome patients.”

Next, Greenblatt hopes to use the fly to identify new small molecules and gene targets that can ameliorate the loss of FMR1 and identify new potential therapies for fragile X syndrome and fragile X-associated primary ovarian insufficiency. He is currently seeking an academic position.

“What excites me most,” he said, “is that while current potential treatments for fragile X syndrome have repeatedly proven ineffective in clinical trials, our new model for how FMR1 is working may accelerate the development of new therapies that repair the loss of FMR1’s translational activation function in human patients.”

Greenblatt won the 2018 Carnegie Institution for Science’s Postdoctoral Innovation and Excellence Award for exceptionally creative approaches to science, strong mentoring, and contributing to the sense of campus community. He helped organize the Carnegie Embryology 100 Year Anniversary Symposium, helps lead the Carnegie postdoc association, shared his science with the public at “Nerd Night Baltimore,” and serves as a “Big Brother” to a Baltimore City youth. Greenblatt received his BS with high honors in chemistry, with a minor in mathematics from the College of William and Mary and his PhD in biophysics from Stanford University.

“I am very appreciative for the support I received from the Jane Coffin Childs Fund,” said Greenblatt, who was a JCC Fellow from 2013 to 2016. In particular, I found that attending fellowship meetings was tremendously valuable. The other Fellows and Board Members are a wonderful group of curious, passionate researchers, who are genuinely interested in pursuing the best scientific questions and not just following the latest trend. They raised the bar high for what is possible in research, and I came away from meetings very much inspired.”

In this video, Carnegie’s Ethan Greenblatt and Allan Spradling discuss their work, which focuses a gene called Fmr1. Mutations in this gene create problems in the brain as well as the reproductive system. They can lead to the most-common form of inherited autism, fragile X syndrome, as well as to premature ovarian failure. They found that Fmr1 serves as a sort of a helper, which boosts the production of critically important large proteins that are difficult for eggs or neurons to manufacture.