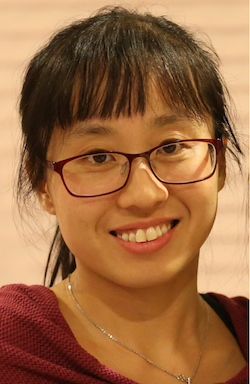 The crystal structure of a transmembrane bacterial enzyme responsible for modification of the cell wall was recently solved by JCC Fellow Dan Ma and her colleagues. The enzyme is a type of MBOAT, an important group of proteins found in all kingdoms of life. This is the first 3D structure of an MBOAT ever solved. The research was published in Nature.

“Obtaining the first 3D structure of MBOATs has great significance in both understanding the molecular catalytic mechanism and development of drugs for disease treatment,” said Ma, who completed the research in the lab of Wenqing Xu at the University of Washington School of Medicine. The protein she studied, DltB, is found in gram positive bacteria, which includes bacteria that cause human infections such as strep, staph, listeria, and diarrheal diseases, among others.  “Little is known about their molecular architecture and functional mechanisms.”

Ma aimed to change that. “We can better understand how a molecule works after we know what it looks like, the 3D structure,” she said.

DltB transfers a specific molecule, the D-alanyl group, from the interior of the cell to the exterior, where it is incorporated into the cell wall. “We found there is an intracellular ‘tunnel’ structure and an extracellular ‘funnel’ structure which sandwich the catalytic center of DltB and together form a path for the D-alanyl group to pass through,” she explained. “When the D-alanyl group binds to the narrow part (the tunnel), the plug (the catalytic center) will open and help the substrate to be passed to the wide part (the funnel) and integrated onto the extracellular substrate. The process can be continuously repeated, which looks like reverse flow in a plugged funnel.”

In addition to determining the structure of DltB, Ma compared the chemical composition of DltB with other MBOATs. “We found that they share considerable similarity within the core region which contains the ‘funnel’, ‘tunnel’ and catalytic center,” she said, indicating that MBOATs from other organisms may also share  similar catalytic mechanisms.

“MBOAT proteins are important drug targets for the treatment of some types of cancer, diabetes, obesity and some other metabolism related diseases, as well as bacterial infections,” she said. “Obtaining 3D structures of MBOATs not only provide insights into how they work, but also molecular basis for drug development.”