Embryonic stem cells have the potential to become just about any cell in an organismor, under the right conditions, a whole organism in and of itself. But what about cells that have already differentiated?

Some can be induced into an embryonic-like state, and they are considered a promising source for regenerative medi- cine, since their derivation is technically simple and ethically uncontroversial. But in many experiments, their development potential is limited. These induced pluripotent (iPS) cells might express genes abnormally, and creating whole animals with them is much more difficult than using embryonic stem cells. Whether or not iPS cells are equivalent to embryonic stem cells has been a contentious question among scientists.

JCC fellow Effie Apostolou began working on the question three years ago, when she joined Konrad Hochedlingers lab at Harvard Medical School. Her findings culminated in a 2010 Nature paper.

Back in 2009, she had just arrived in the US from Greece and didnt know much about stem cells. Her colleague (and co-lead author on the 2010 paper) Matthias Stadtfeld had developed a system to create genetically identical embryonic induced pluripotent stem cells. Thorough analyses revealed that the two types of stem cells expressed genes almost identically in tests. Almost. 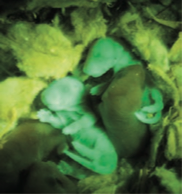 Apostolou, armed with her extensive knowledge of chromatin analysis, and Stadtfeld began to tackle the problem together. Two genes (and several microRNAs) on chromosome 12 were aberrantly silenced in the majority of iPS cells. Information about the genes was scarce in the literature, explains Apostolou, and it might have been convenient to ignore the finding as some kind of artifact of the experimental tech- niques. But the data were so clear, so beautiful, that we had to work with it, she says.

In experiments, mouse embryonic stem cells could be coaxed into creating whole new animals, but only some iPS cells could do the same. The successful iPS cells expressed genes normally, including the two genes on chromosome 12. And, in one case, iPS cells with the two genes silenced could be forced into normal expression with the addition of a histone deacetylase inhibitor.

The research shows that the two genes play an important developmental role. Plus, the two types of stem cells are more similar than many people originally thought, opening the door for more uses of iPS cellsa boon to clinical applications, since iPS cells are easier to collect and they sidestep ethical issues surrounding embryonic cells. This is a big deal, according to Apostolou, because now researchers can screen their iPS cells for normal gene expression and choose only those most suitable for further work.

Apostolou says that working on this project was a gift. She jumped into stem cell research from another field and feels that she has learned so many things in such a short amount of time that completing the work was like earning a second PhD. The whole experience was just amazing, she says.