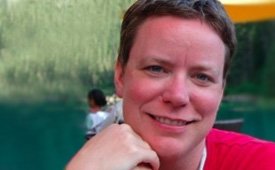 A growing number of diseases are associated with protein misfolding in the endoplasmic reticulum, including the chronic lung disease cystic fibrosis.  Since ending her JCCF Fellowship in 2005, Liz Miller has extended her endoplasmic reticulum work to include how protein folding influences the vesicle budding process  the first step of transport of proteins after they are synthesized.  “We’ve known for a long time that unfolded or misfolded proteins are not captured into transport vesicles,” says Miller, who did her post-doc with Randy Scheckman at the University of California, Berkeley.  “The question is, ‘How does the cell know that a protein is folded and act to very efficiently prevent the vesicles from capturing those unfolded proteins?'”

With cystic fibrosis, mutations in the cystic fibrosis transmembrane conductance regulator (CFTR) gene results in misfolded CFTR proteins that never make it out of the endoplasmic reticulum.  “But the protein itself can function,” says Miller.  “So if you can trick the cells into letting some of that protein out of the endoplasmic reticulum, then you can get some functional protein at the membrane” where it is needed.

To figure out how she might safely help the cell execute that trick, Miller studies yeast in her lab at Columbia University because the processes are well-conserved across eukaryotic cells, from yeast to people.  Miller says, “You wouldn’t want to treat the whole body with a drug that would let every misfolded protein out.  So ideally what we want to find is some sort of small molecule [drug] that would allow some sort of specific leakage.”  Two papers scheduled for November publication in The Journal of Biological Chemistry and already on PubMed (1, 2) detail her team’s latest results.