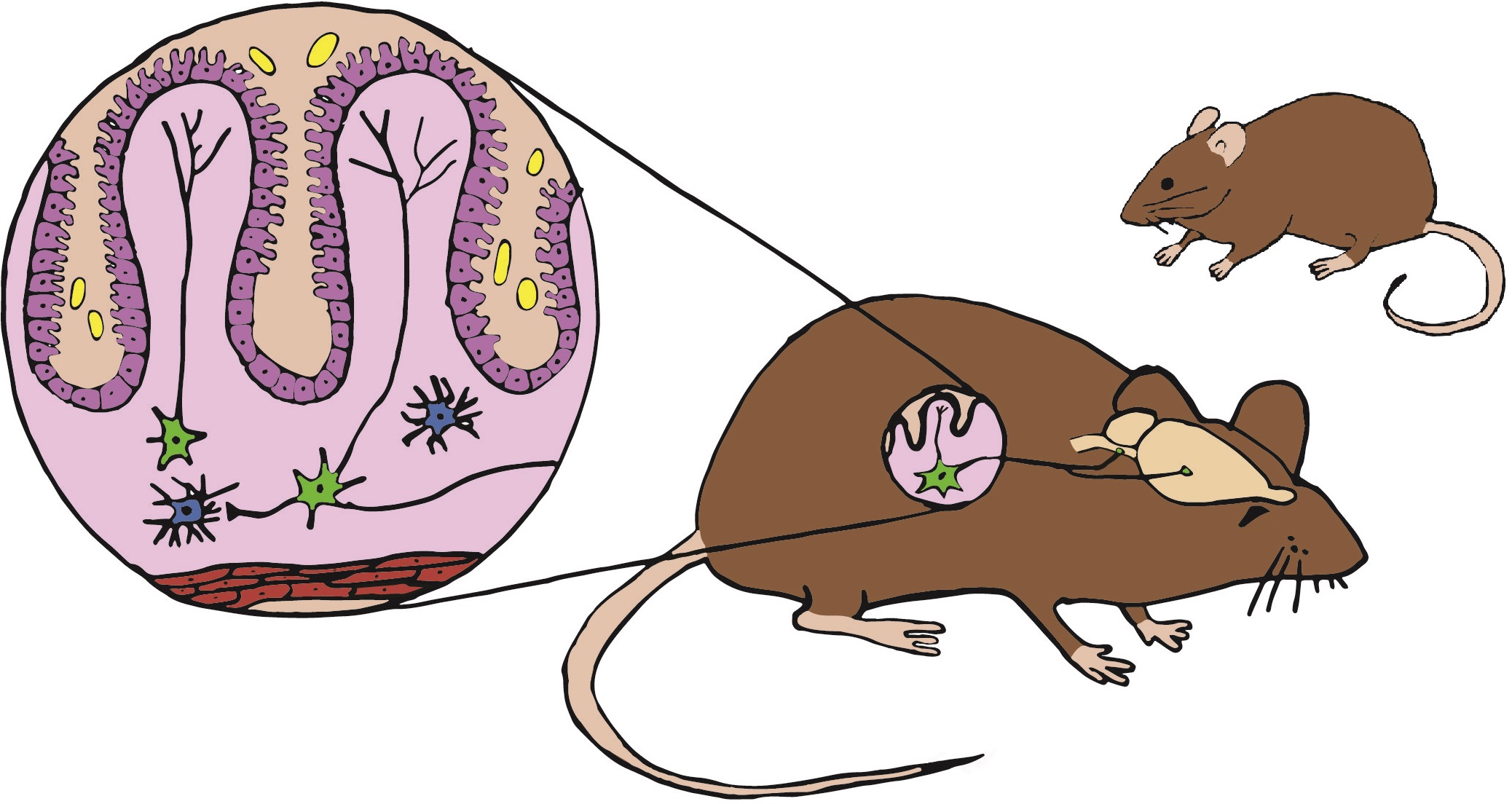 Caption: Being sick changes our behavior. How does that happen, and are these changes in behavior important for helping promote recovery from illness? Dan Littman’s lab has identified neurons in the gut that respond to pathogen-activating immune cells to fight infection. Do these gut neurons also signal into the brain? (Image courtesy of Robert Froemke)

Robert Froemke and Dan Littman will “explore the interface between neuroscience and immunology, using techniques from one system to investigate the other.” Both are faculty members of the Skirball Institute of Biomolecular Medicine at NYU School of Medicine.

“We know from our own experience that being sick changes our behavior,” Froemke says. “How does that happen, and are these changes in behavior, cognition, how we think and feel, are they important for helping promote recovery from illness?  That’s the goal of our project.”

Littman’s lab has identified neurons in the gut that respond to pathogen sensing from intestinal epithelial cells and appear to activate immune cells to fight infection.

“We’re wondering if additionally, there’s signaling along the vagus nerve up to the brain to affect behavior,” Froemke explains, adding that his lab is recording from the vagus nerve in model animals now.

The two are well-positioned to address these questions. “It’s an ideal partnership in my view– an immunologist interested in the brain, and a neuroscientist interested in the body,” Froemke says. “Collaborations are at the root of all major scientific discoveries because every scientist is a subspecialist in one field or another, and no one can do all the investigative research on most big problems on their own,” says Froemke.

Littman, an immunologist, began studying HIV as a JCC Fellow with Richard Axel and went on to discover two molecules that act as co-receptors for HIV and a mechanism that allows HIV to avoid detection by the host’s innate immune system. About ten years ago, he began studying the role of the intestinal microbiota in shaping the normal immune system, and more recently he became interested in neural signaling and behavior, particularly related to the gut, known as the enteric nervous system. He now serves on the JCC Board of Scientific Advisors.

Froemke, a neuroscientist, has developed techniques for recording activity from both single neurons and networks in animals. His recent work on oxytocin and pregnancy piqued his interest in signaling and whole-body changes.

Froemke completed his JCC Fellowship with Christoph Schreiner at the UC San Francisco Department of Otolaryngology. “I probably wouldn’t be here today without the JCC’s generous support back when I was a postdoc. I struck out on all other postdoc funding and was a couple months away from losing my job and going to medical school when I got the call that my JCC postdoc fellowship would be funded,” he says, adding that the experience helped him become a realist about funding and encourage him to capitalize on opportunities like the Pew Innovation Fund to pursue new and interesting projects. “The JCC Fellowship changed everything for me.”