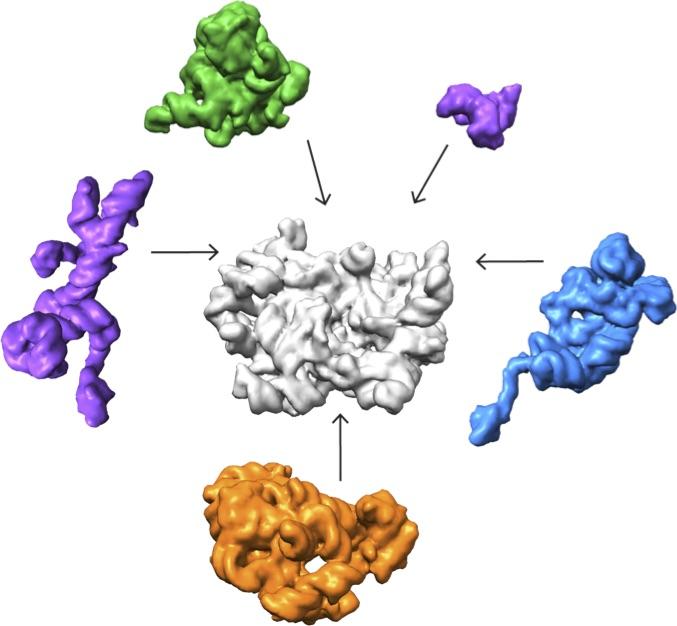 Caption: Using an imaging method called single-particle cryo-electron microscopy (cryo-EM) and accompanying analysis tools, scientists deciphered some of the key steps for how ribosomes are assembled, a first step in understanding their roles in health and disease. Image Credit: Salk Institute

In a recent research study published in Cell, scientists combined mass spectrometry and cryo-EM techniques in order to visualize how ribosomes are assembled. By pausing ribosome assembly, scientists revealed multiple pathways for the construction of the macromolecule, which is responsible for producing all proteins.

“The ribosome is an ideal system to look at how cells are able to build large machines,” says Joey Davis, co-lead author of the study and former JCC Fellow (2012-2015).

Discovered using electron microscopy in the 1950s, the ribosome’s large size and complicated nature  — different components comprised of proteins and RNA — make the molecule notoriously difficult to study. Recently, details of its assembly have been elucidated: component rRNA is processed, modified, and folded. Dozens of proteins are incorporated. Chaperone proteins assist in the process. In bacteria, the process is completed in just two minutes, and one cell can pump out 100,000 per hour. But many of the intermediary steps remained unknown.

“It’s a rapid process, and we were interested in understanding how the binding of one protein influences the downstream binding of other proteins,” Davis says. In this study, he and his colleagues genetically stalled the production of the ribosome’s large subunit by withholding one protein (L17). This was a particularly difficult step because ribosomes are necessary for cell survival, and they had to find a way to perturb their assembly without killing the bacteria immediately. Once successful, intermediate ribosome particles accumulated.

“Next we purified the intermediates and used mass spectrometry to see what proteins were unable to bind in the absence of L17,” he explains. Analysis with pulse-labeling quantitative mass spectrometry showed that the intermediates were not merely nonsensical pieces — they had the potential to mature into functional components of the ribosome and were meaningful parts of the ribosome assembly pathway. With cryo-EM, Davis and his colleagues determined the structures of the varied intermediates and sorted out 13 distinct structures at a resolution of five angstroms. Each of the 13 were then ordered according to their step in the assembly pathway.

The findings suggest that ribosomes have multiple parallel pathways for production, which ensures efficiency and resistance to stress. The results also demonstrate the value of cryo-EM as a tool to analyze complex macromolecules.

As a graduate student, Davis worked on energy-dependent proteases with Robert Sauer at MIT. After two years as a biotech startup’s first employee, he worked on ribosome assembly as a postdoc in James Williamson’s lab at The Scripps Research Institute. Now, he is headed back to Boston as a new faculty member at MIT to study autophagosomes, which digest proteins and organelles, using mass spectrometry and cryo-EM. “Autophagy is a fascinating pathway that has been implicated in a variety of human disease, but we still know very little about the mechanistic details of the process,” he says.