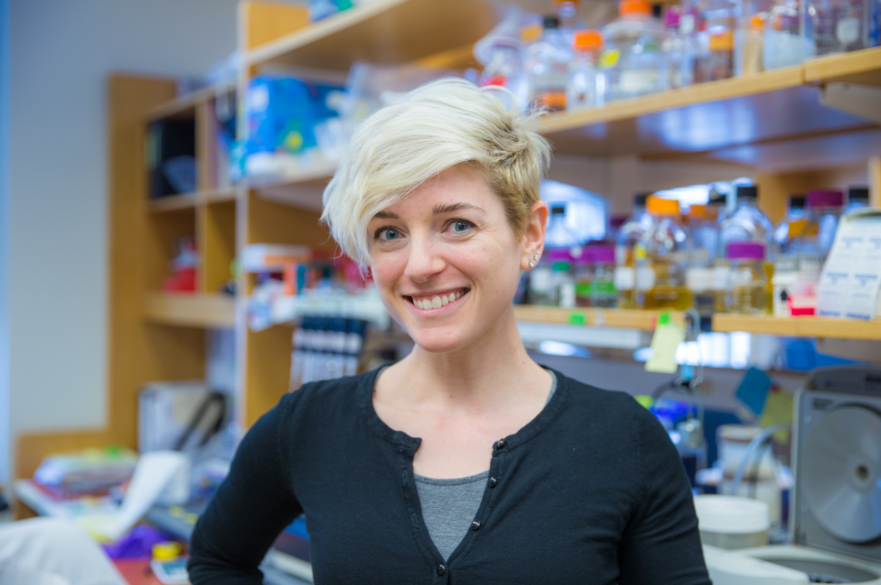 Jessica Polka in the lab. Photo by Alina Chan.

So much of biological research relies solely on model organisms, and for good reasons. Model organisms — think yeast, fruit flies, and mice — are relatively simple, fast-growing, inexpensive, and widely available. But JCC Fellow Jessica Polka makes a compelling case for studying the unusual biology of other organisms. “There’s so much unique biology in non-model organisms, some of which is beautifully described by older literature,” she explains. “With DNA sequencing and synthesis technologies becoming more readily available, we can revisit these phenomena with modern tools. Perhaps these edge cases are the best systems to use to understand what biology is really capable of.”

Polka demonstrates the potential of this approach with her recent work published in American Chemical Society Synthetic Biology. The idea for the study began when she read about unusual bacteria that live on the surface of a single-celled eukaryotic organism. “They protect their host by undergoing a deadly but amazing developmental process: a coiled structure inside of the bacteria extends dramatically, killing the bacterial cell – but enabling the host to be covered in a protective armor of spikes,” Polka explains. “The authors wrote that the structure was most similar to polymers called R-bodies, which are also made inside bacteria living in close association with single-celled eukaryotes called Paramecia. This sent me down a really fun PubMed rabbit hole.”

Polka wondered if R-bodies, which uncurl and puncture membranes when ingested by unlucky Paramecia, could be tuned for cellular engineering. R-bodies have been well studied and previously considered possible tools for bioengineering. But, Polka says, no one knew if they could remain functional when modified with proteins, break membranes outside their natural context, or be tailored to uncurl under specific circumstances.

Inspired by the unusual R-body biology (but still taking full advantage of the model organism E. coli), Polka first attached fluorescent proteins to R-bodies, allowing her to image them within cells. She then showed that the R bodies can rupture E. coli spheroplasts – and therefore function outside their natural context. Finally, she used a screen to test for R-body mutants that extend at different pH levels – and found such mutants.

“I got extremely lucky that R-body extension state can be seen with the naked eye in certain buffers – or more precisely, that R bodies precipitate out of solution when they are rolled up in some conditions,” Polka says. “And, I was surprised that it was so easy to generate mutants that extend in response to a range of different pH conditions. Naively, I had expected to find one or two classes of mutants, but the whole spectrum we found shows how malleable the system really is.”

Polka says she joined Pamela Silver’s lab at Harvard Medical School to develop an engineering mindset. Specific to this research, she’d like to find ways to control R-bodies with other triggers, like temperature, redox state, or even light. “But what little we know about the mechanisms of R body assembly and extension is almost irresistibly cool,” she says. “I struggle to balance pursuing exciting possibilities for applications with wanting to understand how it works. I believe these approaches can complement one another.”

And potential future applications for R-bodies engineering abound, from drug delivery tools to switches in microelectrical systems. “The natural function of R bodies is to act as a kind of intracellular delivery device for Paramecium – I’d like to see if they can also help us introduce molecules into mammalian cells as well,” Polka says.

This research was also featured in The Atlantic.