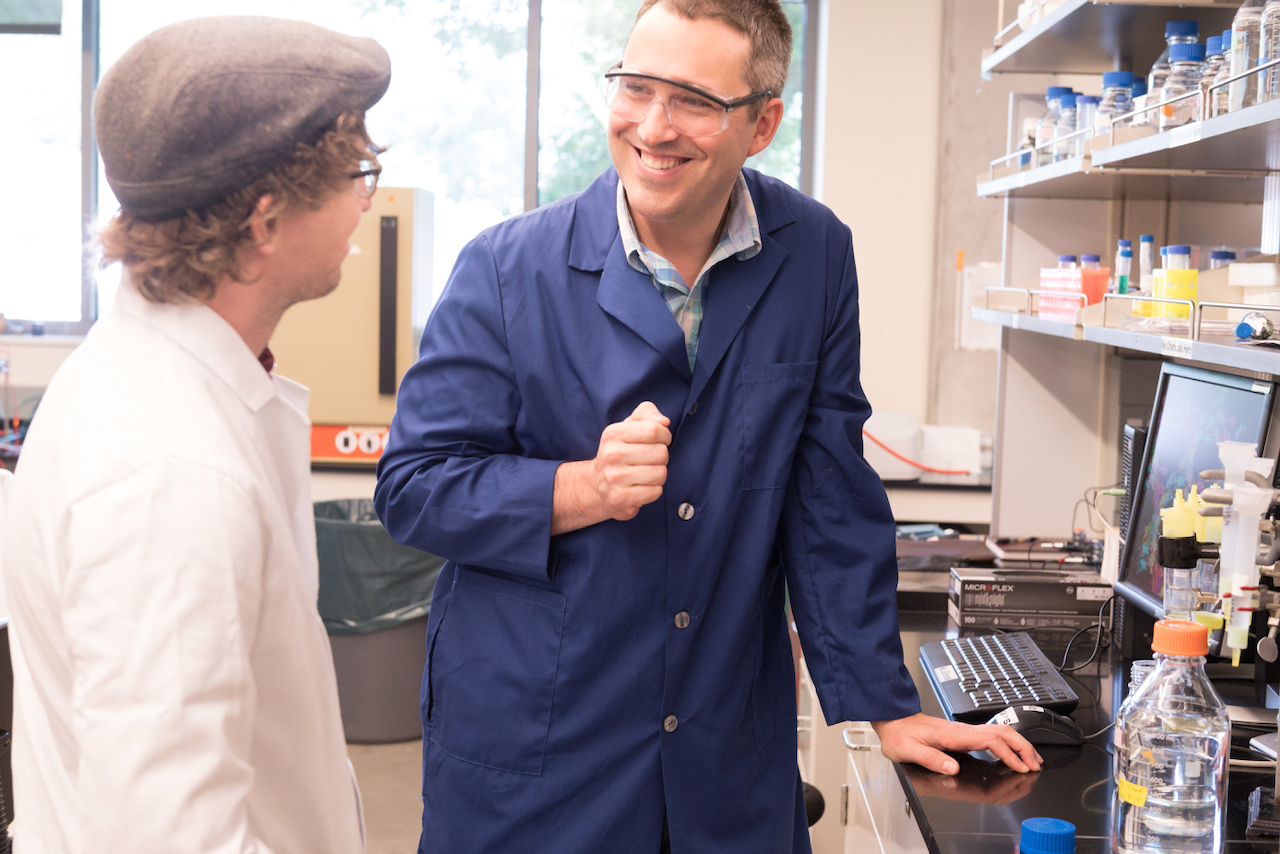 In 2019, Colorado State University professor Christopher Snow was honored with both the Nelson Family Faculty Excellence Award and a Best Teacher Award. A member of the Department of Chemical and Biological Engineering since 2011, Snow leads a research group focused on computer-guided protein and DNA engineering. As a JCC Fellow, he previously studied with Nobel Laureate Frances Arnold at Caltech.

Snow is known among students as a dedicated teacher. When he taught Material and Energy Balances to second year students, he held numerous and lengthy office hours. More recently, he taught an early morning class in Physical Chemistry, including quantum mechanics and statistical mechanics, to third year students. “I was surprised when nominations from this cohort resulted in the award,” Snow said. “The students really appreciated my enthusiasm for the content!”

Snow provides opportunities for undergraduate research, and he has provided space, materials, and mentorship to support a campus student organization’s participation in BIOMOD, an annual biomolecular engineering competition.

One undergraduate, Peter Meyer, told the nominating committee, “It is difficult to summarize all that Dr. Snow does for his students – his giving seems incalculable. Perhaps, however, what distinguishes Dr. Snow most is not what he does, but how much he cares.”

The Nelson Family Faculty Research Award is bestowed to a mid-career faculty member with potential. Dean Dave McLean said, “Chris has distinguished himself through groundbreaking research on protein modeling, enzyme engineering and protein crystal engineering that has led to several patent applications. This award will support his passion for helping his students excel, and for his research.”

Chris attributes his recent success –including the two awards, the graduation of his first generation of PhD students, and the initiation of several newly funded projects– to surrounding himself with talented and engaged colleagues. “When you find yourself enjoying grant writing meetings with your collaborators, it’s a great sign that you’ve found the right sort of enthusiastic folks with whom to tackle new scientific endeavors,” he said.

Snow’s collaborations are diverse and wide-ranging. With Katherine Horak at the National Wildlife Research Center, their team will determine if protein nanocrystals can serve as a delivery vehicle for functional RNA molecules. A completely different synthetic biology project with CSU’s Christie Peebles was recently funded by the Office of Naval Research, aiming to engineer a Staphlococcus strain to persist in the nasal microbiome and signal using odor generation. With CSU’s Tim Stasevich and Brian Geiss, Snow is creating new biomolecular tools for tagging molecules inside living cells. Tracking mosquitoes using DNA barcode particles, is another recent collaborative project, funded by Colorado Clinical and Translational Science Institute and the NIH, with Rebekah Kading in CSU’s Department of Microbiology Immunology & Pathology. Currently, Snow is enjoying sabbatical at the Hybrid Materials Research Institute at Qingdao University, China, where he’s had a longstanding collaboration since 2015. The overall goal of this collaboration is to use biomolecular assemblies to create new hybrid materials that organize luminescent rare earth metal clusters.

Snow’s current research program began to take root during his JCC Fellowship in the protein engineering laboratory of Caltech’s Frances Arnold. “One of the fundamental difficulties of rationally engineering a protein compared to, say, mechanical engineering of large objects, is the difficulty of seeing what you are doing,” Snow explained. “To get a peek at the detailed structure of a proteins, it is most often required to coax trillions of copies of the protein in question to self-assemble into a crystal. It’s a very finicky process.”

When he started his own lab, Snow was excited to shift the design target from individual proteins in solution to protein crystals,which he could shoot with X-rays to deduce the atomic structure. It was like “taking the blindfold off,” he said. “Pretty quickly, however, we started working on a shortcut. What if we could engineer protein crystals that have quite a lot of room left over after self-assembly? In that case, we could further engineer the porous crystals to facilitate the purposeful decoration of the pre-existing crystals with macromolecular guests (protein, nanoparticles, DNA, etc.). In essence, we could create an entirely new type of ‘molecular pegboard.'”

This bionanotechnology could be applied to many interesting applications. Snow says this idea has worked out pretty much as intended.

“We’ve put enzymes into the crystals to create new types of catalysts. We’ve put fluorescent proteins into the crystals and triggered their subsequent release (the basis for new tough, biocompatible, sensor pixels). We’ve started to explore the use of these crystals for biomedical applications (i.e. with therapeutic macromolecule payloads). Finally, we’ve attempted to anchor guests within the pre-existing crystals so that they adopt a coherent orientation with respect to the host crystal,” Snow says. “Scaffold-assisted structure determination is one of my favorite long-term applications because of the possibility of revolutionizing the way that structural biologists obtain high-resolution structures of macromolecules.”