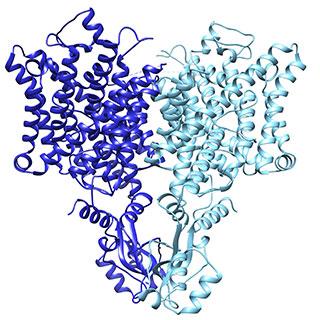 Chloride and other ions pass across cell membranes through channels made of CLC proteins. If these channels are disrupted, muscles aren’t able to contract properly, kidneys can’t regulate electrolyte flow, and the pH of cellular compartments goes awry. Hereditary diseases like osteoporosis, myotonia congenita, Bartter syndrome, Dent’s disease, and osteopetrosis all involve defects in genes that encode CLC proteins.

Some CLC channels operate passively, allowing chloride ions to flow from areas of high concentration to low. Others actively exchange chloride ions for hydrogen. Both types were expected to have similar three dimensional structure because they are made of similar building blocks. But how could such similar structures operate so differently? This is a question that former JCC Fellow Eunyong Park investigated.

“During my Ph.D. training working on membrane protein mechanism, I became very interested in learning structural biology,” says Park, a postdoc with Roderick MacKinnon at The Rockefeller University. “The CLC project was most interesting to me as it came with the long-standing mystery in the field — why some CLC proteins function as passive channels whereas other CLC proteins function as active transporters. It was very clear that we needed to solve structures of CLC channels to answer this question.”

Park first approached the question using x-ray crystallography. “Obtaining well-diffracting crystals was the hardest part of my CLC project initially,” Park says. “I spent my first two years mostly optimizing poorly diffracting crystals, which was a very laborious process. Eventually we gave up crystallization and switched to an alternative method called cryo-electron microscopy (cryo-EM), which worked out great. All the trouble-shooting and reagents for crystallization efforts helped a lot in analyzing samples by cryo-EM, so we could get the structure done quickly.”

From the structural data, Park and his coauthors discovered a structural detail that helps explain the function of the two types of CLC channels. In the active version, the position of a loop partially blocks the ion’s path through the opening, whereas the loop is flipped down in the passive channel, allowing chloride ions to travel down the electrochemical gradient. The results were published in Nature.

A relatively new technique, cryo-EM is considered revolutionary in structural biology because it offers an alternative to x-ray crystallography, which relies on protein purification and crystallization trouble-shooting. “Structural biology has experienced a true revolution thanks to devices capable of directly detecting the electrons used to visualize a sample,” says senior author Roderick MacKinnon, head of the Laboratory of Molecular Neurobiology and Biophysics at The Rockefeller University and Park’s postdoctoral advisor. “With this technology, it has become possible to determine high resolutions structures based on images of individual, randomly oriented protein molecules.”

In 2014, Park won the 2014 ASCB Kaluza Prize for his work at Harvard University studying the mechanisms of protein translocation in living cells and developing new methods to examine specialized channels within the endoplasmic reticulum. He was a JCC Fellow from 2013 to 2016.

In January of 2018, Park will start his own lab at UC Berkeley, where he plans to continue studying mechanisms of membrane transport proteins combining biochemical, biophysical, and structural (cryo-EM) approaches.