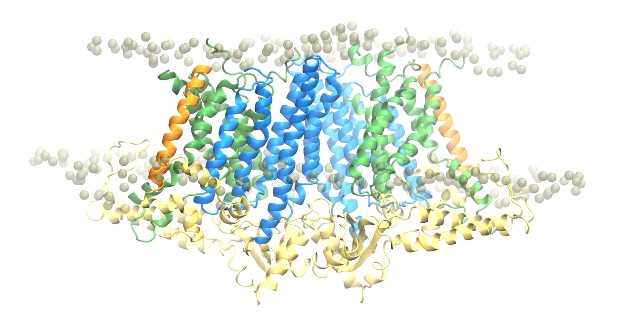 A punch versus a caress. The feel of Velcro versus silk. Our sense of touch distinguishes between these sensations, transforming physical force into biochemical signal.

Proteins known as mechanically activated ion channels form the basis of this process, playing an important role in touch, hearing, sensation of pain,  regulation of blood pressure, and more.  And they’re not just limited to people, or mammals. Even plants have them, sensing environmental cues like wind direction or the unyielding edge of a terracotta pot.

In a recent eLife paper, JCC Fellow Kei Saotome and his colleagues uncovered the three dimensional structure of OSCA1.2, a mechanically activated ion channel in a newly identified family of such proteins.

“By revealing the first structural snapshot of an OSCA channel, we have provided a valuable starting point to unravel the details of a force sensation mechanism that is widespread throughout biology,” says Saotome, who is a postdoctoral fellow working with Andrew Ward and Ardem Patapoutian at Scripps Research.

Saotome seeks to understand the molecular details of how external cues such as mechanical force are converted into cellular signals. “So it was very natural for me to be interested in the OSCA family of proteins, which are thought to be ‘mechano-sensors’ in plants,” he said. “That almost nothing was known about the structure and function of OSCAs made the project even more attractive.”

Using cryo-EM, the research team found that the OSCA1.2 protein has dimeric architecture, with two subunits characterized by 11 transmembrane helices. They also pinpointed the pathway in each subunit that allows ions to pass through. Sebastian Jojoa Cruz, a graduate student at Andrew Ward’s lab, Swetha Murthy, a postdoc in Ardem Patapoutian lab, and Alex Tsui, a graduate student at Oxford also contributed to the project.

“No one had studied the structure of OSCA before, so everything about the structure was new and exciting,” Saotome says. Once they found the structure, the biggest conceptual challenge was to figure out how it might be sensing membrane tension.

“We were able to make some hypotheses about what parts of the OSCA protein may make it especially sensitive to mechanical force, but we haven’t been able to make definitive conclusions so far,” he explains. Most of the protein lies within the cell membrane, and intriguing interactions with membrane lipids could help explain how the protein senses and conveys tension.

Surprisingly, the OSCA1.2 structure was similar to that of TMEM16s, a different family of proteins found in animals. “We hope to resolve structures of TMEM63 proteins to see how they compare to OSCAs,” Saotome says. “This will also allow us to get an evolutionary perspective on mechanosensation.”

Saotome has been studying membrane proteins since he was an undergraduate at Swarthmore investigating the M2 proton channel in the influenza A virus. He then went on to earn his PhD from Columbia University, working with Alexander I. Sobolevsky on the calcium channel TRPV6.

“It’s been great working under the guidance of my mentors Ardem Patapoutian and Andrew Ward, who have given me the freedom to pursue my research interests,” Saotome says.